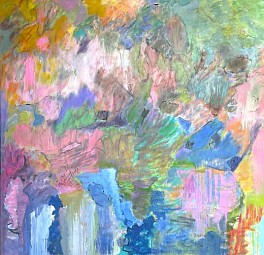 Brodsky’s first classroom experience under Ad Reinhardt at Brooklyn College in 1961 was an extraordinary one. The students were asked to take their places in front of their easels in the large studio. The master had set up each easel with a 30 x 40-inch canvas primed white. As if the sight of the archetypal blank canvas was not intimidating enough, he spoke only once, issuing the simple directive: “Begin.” Then, with no explanation, he quickly departed the studio full of surprised students. When Reinhardt returned a few hours later, he slowly paced by the easels, reviewing the paintings in progress, but rarely speaking. When he came to Brodsky’s painting he paused and asked, “Who taught you how to paint?” Brodsky struggled to find a reply when Reinhardt answered his own question, saying, “You must have known all along.”

“Reinhardt taught commitment,” says Brodsky. “He never used the word but that’s what he taught, not technique.” Upon graduation in 1965 Brodsky was awarded best in her class.

In 1962, while still in college, Brodsky landed a job at Herbert Mayer’s World House Galleries.  The gallery represented an eclectic group of European artists such as Herbert Bayer, Bernard Buffet, Jean Dubuffet, Wassily Kandinsky, Ernst Ludwig Kirchner, Paul Klee, and Giorgio Morandi. For the next two years Brodsky also came to know two of the gallery’s leading Abstract Expressionists — Esteban Vicente and Philip Guston. When the gallery’s director learned that her assistant was an artist, she asked to see her work. She was so impressed that she added Brodsky’s watercolors to an exhibition to hang beside abstract watercolors by Kandinsky and Klee. This was her first exhibition, but not her last.

Brodsky's work is about color and mark-making.   Mark making is a term used to describe the different lines, patterns, and textures that are made visible as a manifestation of applied or gestural energy. It is the gestural “language” of the artist becoming manifest. She also shares an interest in mythology and symbolism.  The critic Peter Falk writes:  "It is mysticism joined with numerology, alchemy — and the primal mark-making of non-literate cultures as found in cave paintings — that have become part of a vocabulary that has continuously flowed into her paintings."

Over the decades, Brodsky’s deeply emotional response to color became her bedrock.  The hallmark of her paintings is the chromatic tensions and transitions rippling across the surface as they evoke depth and space. This is accomplished through a careful technique using a variety of brushes, vivid high-quality pigments, and oil emulsifiers. The fine art of layering, glazing, and revealing pentimenti are crucial to her technique.

Brodsky has had more than 30 solo and group exhibitions in her career.