We are pleased to share that artist David Einstein will have an exhibition of new work at the Triton Museum in Spring 2022.  This is Einstein's second exhibition at the Triton, which held a 50-year retrospective of his work in 2019. More info to follow. 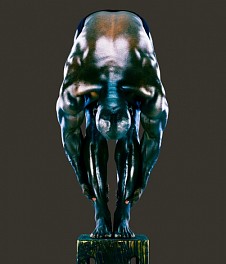 Schatz won a Platinum Award for his "Shapes of the NFL" series and had 9 Gold winners for his Dance Series, portraits, and Installation Series, among others. 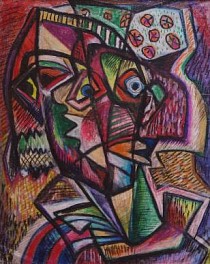 This is the trailer. 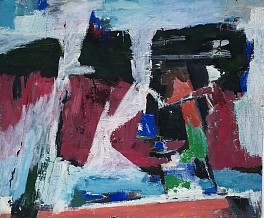 Lawrence Fine Art is pleased to announce that it will participate in this year's Hamptons Fine Art Fair, opening Thursday, September 2 and extending throughout Labor Day Weekend. The fair will feature an array of the finest art from the finest galleries. Tickets may be purchased from the fair directly.

The Gallery will also present outdoor solar sculptures by Steven Lowy. They are powered by solar panels and are illuminated at night. This is an example of how green technology can inform today's art.

The fair begins with a VIP preview Thursday, from 4-10 pm. The location is the Southampton Arts Center, 25 Jobs Lane, Southampton.

Lawrence Fine Art is pleased to announce that it will participate in this year's Market Art & Design, Hamptons, August 12-15. The gallery will feature a combination of modern masters and contemporary artists including Howard Schatz, Geoffrey Dorfman, George Schulman, Cleve Gray, Seymour Fogel, Brad Walls, Robert S. Neuman, Rolph Scarlett, Sally Michel Avery and Amaranth Ehrenhalt. It will also include innovative solar sculpture by Steven Lowy. This is one of the first in-person fairs since the Covid-19 crisis.

"Art needs to be seen and experienced in person.  We've all missed that over the past year-and-a-half," said Gallery Director Howard Shapiro. "We have some phenomenal works to show."

Lawrence Fine Arts presentation will include contemporary photography by Howard Schatz and aerial photography by  newcomer Brad Walls.  It will include abstract expressionism by Amaranth Ehrenhalt, one of the "Women of Abstract Expressionism," and Robert S. Newman; lyrical abstraction by Cleve Gray and David Einstein; and minimalist work by post-war modernist Seymour Fogel. The gallery will also highlight an early work by Sally Michel Avery.

The Gallery will also present for the first time solar sculptures by Steven Lowy. They are powered by solar batteries and are illuminated at night.  "We have watched Steven work for several years to get this right.  Now is the time to show them," said Shapiro.

Lawrence Fine Art is pleased to announce that it will represent the work of American artist Charles Cajori, one of the founders of the "Downtown" artistic scene.

Charles Cajori  (1921-2013) was an important second generation abstract expressionist painter. He was also an important teacher and active artist in the 10th Street scene. In 1952, he founded, along with Fred Mitchell, Lois Dodd, Angelo Ippolito and Sally Hazelitt, the artist cooperative Tanager Gallery. In 1964, joining with former students of the Pratt Institute and several artists including Mercedes Matter, Sidney Geist, Georgio Spaventa, and Esteban Vicente, he founded the New York Studio School of Painting Drawing and Sculpture. His work can be found in the collections of the Corcoran, the Hirshhorn, the Metropolitican Museun the Whitney Museum, the Denver Art Museum and numerous other institutions.

Cajori always worked with the tension between the fixed reality of the female figure and the flux of perceptual and gestural response. Indeed, ike De Kooning, Cajori never completely left the figure even if his work could be termed abstract.  His work owes a debt to Cezanne, Titian, Soutine and De Kooning. Unlike many of his contemporaries, Cajori did not attempt to discard his artistic forbears but to work through them to his own artistic expression.

"Cajori’s ...work.... suggests a reexamination of Cézanne in light of de Kooning, to whom Cajori’s brushwork owes an obvious debt. Cajori seems to pit these two masters against one another to seek a common ground as a base for his own work. This technique of working in response to masters, common to painters as far back as Giotto, is an indication of the esteem in which Cajori holds his tradition."

"Hearing Cajori talk, one soon realized that painting for him was an almost mystical pursuit. It demanded an almost spiritual awareness of the process of seeing, and fearlessness about adapting to its ever-changing demands."

Cajori was one of the artist-founders of the influential Tanager Gallery. The gallery aimed to bring a whole new generation of artists to the attention of patrons who were not seeing them in the Uptown galleries of the day. The recent exhibition  at the NYU Grey Gallery "Inventing Downtown: Artist-Run Galleries in New York City, 1952–1965" in 2017, showed that the Tanager Gallery was an important influence in establishing the "Downtown Scene" and lending credibility to artists who are today household names, including Alex Katz and Tom Wesselman.

Lawrence Fine Art will offer works by a number of prominent post-war New York School artists, as well as contemporary works, at the Hamptons Virtual Art Fair, September 2-7.  The portal for the fair, which is already accessible, can be accessed here. Once in the portal, fair goers can see the works in 2D or 3D format, ask questions in the live chat room, view the works on their home walls if they use the App, and of course purchase the works.

"We are so happy to be working with Rick Friedman and his crew," said Gallery Director Howard Shapiro.  "They are developing cutting edge technology to help collectors view and consider art all while staying safe."  The fair features enhanced functionality developed to help fair goers enter as quickly as possible.

Lawrence Fine Art will present work from a variety of post-war New York School artists, including Robert de Niro, Sr., Jean Steubing, Gandy Brodie, Melville Price, Vivian Springford, Amaranth Ehrenhalt and Robert Neuman.  "This is one of our strongest line-ups ever," said Shapiro.  "We are  particularly proud to be presenting work by Jean Steubing.  Not only did she plan the seminal 9th Street Show in 1951, but she also participated.  The circle of 'The Women of Abstract Expressionism' continues to grow."

Gandy Brodie is an artist who has not been seen at art fairs for awhile. "It's hard to believe this master has been ignored," said Shapiro, who said that Giotto's Angels by Brodie, to be shown, is a favorite of his. Both Melville Price and de Niro, Sr. exhibited at the 9th Street Show.

The line-up also includes works by photographer Howard Schatz, and contemporary artists Janet Mait, Geoffrey Dorfman and Angel Ortiz (aka LA2). "Howard is always excellent and Janet and Geoff have both created new work recently," said Shapiro.  "We hope to provide collectors with a safe and immersive experience."

Lawrence Fine Art is pleased to announce that it will represent the work of American artist Ben Wilson in conjunction with Montclair State University.

Like many of his compatriots in the New York School, Ben Wilson (1913-2001) began his career painting figuratively before transitioning to abstraction after WWII (and somewhat later than his compatriots.) His early work had a strong political component--one critic noted his "strong social protest." Later, he began to paint for the WPA Project.

He described his early years this way:

"My early figurative days are long gone. They were necessary then for me and for the (WPA) project. I painted the agony and anger of the times. Not very pretty. I recorded what was going on both in this country and overseas. The degradation that was Europe, the hopelessness that was America. But I couldn't stay in that vein...."

After the war, Wilson, born in Europe and a Jew, was devastated by what had happened. His work became dark, powerful yes, but difficult to look at.

At first, Wilson resisted the move to abstraction and abstract expressionism after the war.  He was highly uncomfortable with the egoism inherent to this movement. A sojourn in Paris in the early 50s changed his perspective. His work had always drawn from European roots, especially the cubists.  Indeed, the cubism of Picasso, Braque and Leger, and their influence, never left him. Ultimately, it could be said that Wilson arrived at Abstract Expressionism, but from a different direction.

A critic in the Princeton Review in 1987 explains: "Ben Wilson's canvases, while still within the abstract expressionist mode, retain echoes of Picasso, Braque and even mechanistic elements of Fernand Leger." Another critic writes: "The expressive abstractions of Ben Wilson belong among the best work created by New York artists in the 20th century; but they stand outside the critical labels applied to Abstract Expressionism..."

Ben Wilson had more than 30 one-man shows during his lifetime, first starting to show in the early 1930s. As early as 1942, he was singled out by the New York Times art critic Edward Alden Jewell as a "discovery." He exhibited at the Brooklyn Museum (1934), the Pennsylvania Academy of Fine Art, the Corcoran, the Art Institute of Chicago, the Dallas Museum of Fine Arts, among others. His work is in the collection of the Newark Museum and the Montclair Museum.

Wilson has recently been "rediscovered" and was the subject of a one-man show at Quogue Gallery in 2017 and Montclair State University has published a catalogue of his life and work. Lawrence Fine Art wishes to thank the University for making this work available.

The art market--collectors, curators and museums--is in the early stages of a broad reappraisal of the contribution of previously overlooked groups to the development of post-war modernism. Artists who were regarded on the periphery--because they were women, gay, black or brown--are getting a much-deserved new look as old prejudices crumble.

Judith Lindbloom--young, a woman and openly gay--was one of the many artists who streamed to New York in the post-war years, drawn by the heady atmosphere and freedom to be found. It was not an easy life, especially for a women, because women then were not taken seriously.  Born in Detroit, Lindbloom (1933-2012) threw herself into the life. Pictures show her cigarette in mouth intently painting. At night she would hang out at the famed Cedar Bar, where she became especially close to Franz Kline.

There was a downside to this Bohemian life--drink and drugs--and Lindbloom indulged too much and too frequently. In 1964, her partner committed suicide and right before she was to be included in a group show at the Whitney, Lindbloom had a breakdown. She would not resume painting for sixteen years.

Lindbloom was a devoted fan of jazz and a muse to many of the greats of the era, including Gil Evans, Sony Rolllins and Steve Lacy. She designed and painted numerous album covers for some of their greatest work. Her work is included in a new compendium entitled "The Art of Feminism: Images the Shaped the Fight for Equality, 1857-2017."

Lawrence Fine Art is honored to represent Lindbloom's estate.  The estate contains not only a treasure-trove of works from the mid-1950s almost until her death in 2012 but also her notebooks, journals and letters which offer a first-person insight into the personalities and atmosphere of the period.  In one letter, Lindbloom talks about going from gallery to gallery and being turned down because she was a woman.  In another, she records the reactions of those in the Cedar Bar on the day they found out Jackson Pollock had died. 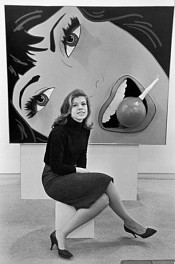 Marjorie Strider, a Pop artist who slyly subverted her male counterparts’ takes on consumerism and the female form, creating images of packages that oozed their contents and women whose curves jutted from the picture plane, died on Aug. 27 at her home in Saugerties, N.Y. She was 83